In this article, the team, at Take off Bill, take a look at the Construction of Trump’s wall and how its progressing.

President Donald Trump declared a state of emergency in February over the situation at the US southern border, which has seen a rise in the number of migrants entering the country 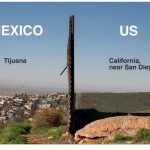 The emergency order has allowed Mr Trump to divert money from other projects to fund his long-promised wall.

Lawmakers have voted twice to end the emergency but have not yet achieved the two-thirds support needed.

The below seven charts and maps that try to explain what the situation is like at the US-Mexico border and where progress is at with the wall.

There hasn’t been that much progress to date…

Mr Trump has argued a wall is needed to tackle the border issue – the main promise of the 2016 presidential election campaign.

Before he took office, there were 654 miles (just over 1,000km) of barrier along the southern border – made up of 354 miles of barriers to stop pedestrians and 300 miles of anti-vehicle fencing. 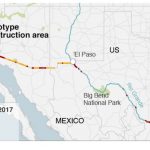 In the run-up to the 2016 election victory, Mr Trump promised to build a wall along the border’s entire 2,000-mile length.

After the election, he later clarified that it would only cover half of that distance, with nature, such as mountains and rivers, helping to take care of the rest.

Since Mr Trump entered the White House, although some of the already existing barriers have been replaced, work on extending the current barrier only began this year.

Overall, $9.8bn has been secured since January 2017 to construct approximately 509 miles of “new border wall system”, according to US Customs and Border Protection (CBP).

A total of 57 miles of replacement barrier and nine miles of new secondary barrier have been constructed – a total of 66 miles.

However, no “new wall” – any extension to existing structures – has yet been completed.

The first construction of new barrier has begun in the Rio Grande Valley, Texas, where 13 miles of “new levee wall system” is being built in Hidalgo County. The construction of an additional 11 miles is expected to start this year.

The money for the barrier has come from previous funding approved by Congress as well as the extra cash Mr Trump has been able to access since he declared a state of emergency.

By the end of 2020, CBP says it expects to have completed 450 miles of “new border wall system” – which includes steel-bollard barriers, all-weather roads, lighting, enforcement cameras and other technology – and to have started to build an additional 59 miles.

A number of widely different estimates for Mr Trump’s promised concrete wall have been put forward by official and unofficial bodies – ranging from $12bn to $70bn. That’s a wild spread we think at, Take off Bill.

Mr Trump’s initial price tag of between $8bn and $12bn (£6.4bn and £9.7bn) for a wall covering half the length of the border was widely disputed. 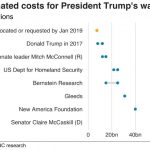 The 650 miles of fencing built under President George W Bush cost an estimated $7bn, and it could not be described as fulfilling Mr Trump’s promises of a “tall, powerful, beautiful” barrier.

However, Mr Trump said earlier this year he wanted $5.7bn in addition to the $1.7bn already allocated by Congress for homeland security.

CBP says it now has $9.8bn in funding – which exceeds Mr Trump’s demands.

The agency says that, on average, it costs approximately $6.5m per mile to construct a new border wall or replace existing legacy fence.

Mr Trump has changed his view of what constitutes a wall.

His promise to build a “big, beautiful wall” between the US and Mexico was a rallying cry throughout his 2016 election campaign. And early on, when he described it, he talked about concrete. 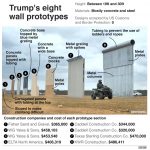 But once elected, he began talking about a barrier made of steel, so that border agents could see through it.

And in October 2017, when the Trump administration revealed eight 30ft-tall wall prototypes – they were a combination of concrete and metal.

Officials at the US Customs and Border Protection agency have said none of the Trump administration prototypes tested in 2017 met its operational requirements but did provide “valuable data”.

He said the barrier was “virtually impenetrable”, “very, very hot” and had been tested by “world-class mountain climbers” – something leading US climbers have since disputed.

Here at Take off Bill, we really do think we could have helped out with the Construction of Trump’s wall  at an early stage with a Take off or a Bill of Quantities for the various prototypes of the proposed walls.

If President Trump had contacted us for help at the Construction of Trump’s wall and we had produced a Take off or Bill of Quantities for his project, he would have know the costs up front!! Saving millions of Dollars!!

If you have a construction project, whether big or small, contact us here at Take off Bill at plans@takeoffbill.com for a quotation for a Material Take Off or a Bill of Quantities. Check out of website too at http://www.takeoffbill.com .

We are a team of Chartered Quantity Surveyors and Estimators working to the highest industry standards and using the latest industry software to produce top quality Take Off’s and Bills of Quantities.